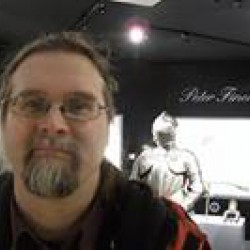 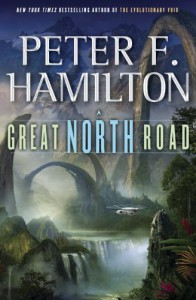 My first Peter Hamilton novel and it did not disappoint. A 914 page novel where not one page was wasted. GNR is surprisingly well constructed. Hamilton use of when to flashback and when to move the story forward is amazing. Marvelously keeps the suspense up while still feeling like the investigation was moving forward. It is rare to see this detailed a world construction outside of a high fantasy series. Manages to have the detail and plot depth of a multi-volume series in a stand alone. Fantastic.

The Joker: Death of the Family

A at times meandering massive (19 issue) story arc of Joker hunting down members of Batman's crimefighting "family". As I plodded through it I was certain the payoff would not be worth the effort, especially during the teen titans issues( The Joker if he truly wanted them dead could have eaten this bunch with little effort and picked his teeth with their bones).
the payoff coudln't be better.
the best parts: Gail Simone's Batgirl Scott Snyder's Batman and the last few issues (Batman and Batman and Robin)
A special nod to artist Patrick Gleason who truly made the joker look like a inhuman madaman with a barely attached face.

Good to great for the most part but way too long.
Tweet 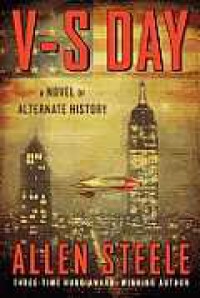 Another smashing good read from Allen Steele. This time an alt-history novel where the space race is not between Russia and the U.S. during the cold war,but between Nazi Germany and the United States during the World War II. A race ensues with possibly deadly consequences between Wernher Von Braun and Robert Goddard and Co.

Steele fills the book with his characteristic crisp dialogue, excellent extrapolation and slightly quirky characters. A joy to read.
Tweet 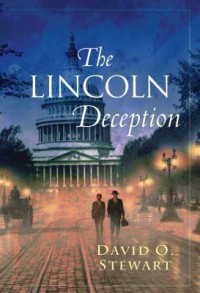 A very good historically based hunt for the larger conspiracy behind the Lincoln Assassination.
It began as well paced page turner with two interesting leads, Dr. Jamie Fraser and Black former major leaguer Speed Cook ( loosely based on Moses Fleetwood Walker). The two play off of each other well eventually becoming a working tandem. It was as the book approached its climax that it began to bother me. Nearing the end with no resolution yet fully in sight, I had a sinking feeling that it would wrap up too quickly. I was right. The ending feels forced and slapped on and the leads resolve themselves to it much too quickly.
A good read for the first 7/8ths anyway.
Tweet 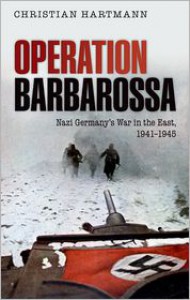 A quick overview of a massive part of the war in Europe spanning 4 years of untold carnage. Hartman does a good job of covering the basic themes and mixes in individual stories of participants and victims. whets my appetite for a more in depth multi-volume study.
Tweet 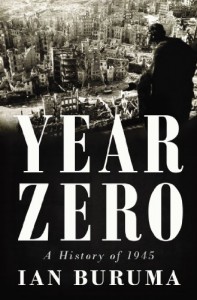 As good as history gets. Year zero is a history of 1945 and the hopes for change that it brought and the gutting of those dreams. In the words of a reviewer, "..A heart-wrenching account of the horrors,the unimaginable cruelties, and the sheer stupidities of the last months of WWII, and the attempt to deal with them in the first few months of peace."

The writing, the organization of thought, the ability to rationally assess history seemingly without an agenda Just masterful. Tying the end of the war to basically all that comes next in 7 decades.
I am beyond words here. Essential reading (but far from easy) for anyone with a pulse.
Tweet

No Plan B: Peyton Manning's Comeback with the Denver Broncos 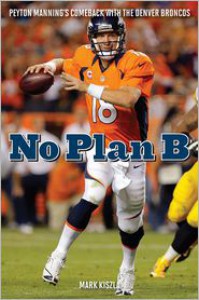 an interesting read with lots of tidbits and such about how and why Peyton is Peyton. I just wish the book had been able to escape feeling like an elongated espn article.
Tweet 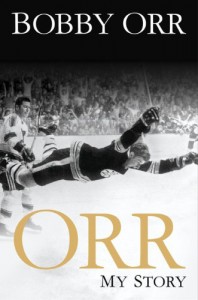 A Candid memoir not of the telltale variety but more about here's why I did what I did and who helped me, where I went wrong and how future players can avoid my mistakes type book. A very good section about the state of the game (including a great section about questions for prospective young players and whether or not you are ready for the hurdles of attempting to become a pro)and Orr's suggested changes closes out this very well done overview.
Tweet

Once Upon a Time in Hell (The Heaven's Gate Trilogy) 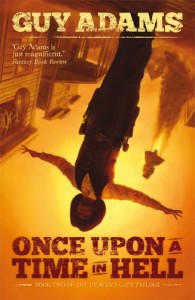 A Little tigher plotted than the first book, with stronger characterizations and a huge uptake in the wierd. Can't wait for book three to see how it all ends.
Tweet

The Good the Bad and the Infernal 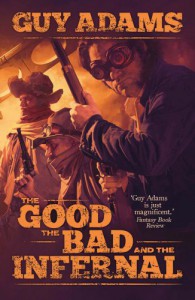 A fast fun frolic through a mix of spaghetti westerns steam punk and a heavy dose of the weird. Not high literary by any means but a pleasurable read.
Tweet 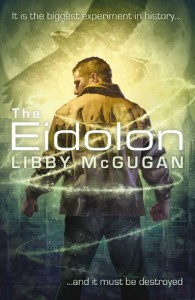 An intriguingly different debut mixing Dark matter the CERN Large Hadron Collider project and a different view of the paranormal.

McGugan starts out slowly plotwise (intentionally) and builds the main character deliberately so that we believe his transformation from atheistic scientist to something other... She keeps the story grounded in character which allows her to move away from realism in small steps.

It is important to note that if you are looking for great scientific detail about the LHC or the CERN facilities- this is not the book for you. The science is here in small smatterings but is used simply as plot elements.

A good quick read with a fast pace (once it reaches crescendo) and mostly good characters. the ending is a tad forced but a still a good read.
Tweet 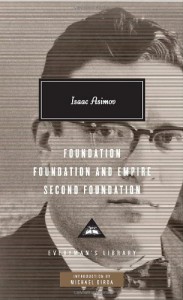 An all-time SF Classic, I'd last tried to read it all the way back in the early 80's in the Brooklyn Tech Library and then its being a collection ( a "fix-up") of short stories and not true novels kept me from getting very far.

The short story aspect stills drags it down a bit. The lack of continuing characters along a more protracted story arc makes it more difficult to take in the entirety of the Foundation and some of the breath and depth of the series is not actually laid out but assumed as a given.

Even going in with preconceived notions of preparedness for anachronistic language and blatant sexism of the time,I still had difficulty getting past some of it. the worst offender was the prevalent "tell don't show" style. of all the conflict contained in the 602 pages only one battle is actually recounted between two ships and it lasts barely one paragraph. Most of the book is about conversations between the characters and is dialogue (in the philosophical sense) heavy.

A great plus is the usage (some of which appear for the first time) of what became the baseline tropes of speculative fiction- Mutants, spacecraft,vast empires,commerce etc.
I still think Asimov's idea of a space station in which each craft maintains its own sovereign nation status while docked is better than most space station ideas created decades later.

A Classic series which laid the foundation (pun intended) for nearly everything that came after. Well worth reading, just try not to be distracted by how the old thing creaks.

AND by the way Hari Seldon is the most annoying self-important know-it-all asshole in the universe!
How he was able to create the greatest shaggy dog story of the future and get the next 3 centuries of the future human race to go about fulfilling his self-fulfilling prophecy is the best con since P.T. Barnum or L.Ron Hubbard!
Tweet 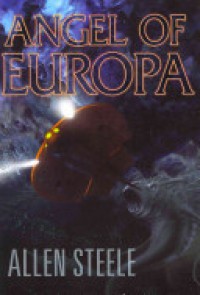 A 90 page novella. It was good as good as Steele's writing usually is. I just wish there was more of it. An interstellar mission to the moons of Jupiter as the structure for a pretty simple yet fun murder mystery..not enough. Not enough character interactions or backstory about the mission or the locales. this screams to be remade longer deeper and richer.
Tweet

Kansas City Lightning: The Rise and Times of Charlie Parker 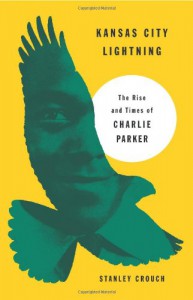 A mixture of factual biography and highly literate, poetic/prosaic study. Crouch has obviously studied Bird's life and career for a great deal of time. (this book was in various states of completion isnce the early 80's)He has his own opnions and states them firmly and resolutely. His descriptions of the creative process for Charlie Parker (and Jazz Musicians in general) is nothing short of magnificent. I have not seen a better one that does not involve multiple musical examples and require that the reader have some modicum of musical theory.

A magnificent melange of biography and artistic study. A must for anyone interested in Jazz or great american art.
Tweet

Dust and Shadow: An Account of the Ripper Killings by Dr. John H. Watson 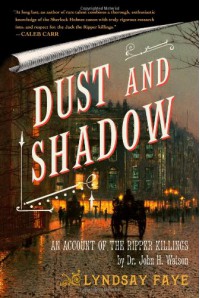 Lyndsay Faye's first novel before she moved on to 1800's New York. A mix of Sherlock Holmes and Jack the Ripper is a difficult minfield of an idea to walk through. Lyndsay nails it. The right amount of reverance and insider knowledge of all things sherlock is evident. Couple that with well sprinkled factual ripper chronology and you get a clever sure fire thriller which only hints of what she is capable of as a writer.
Tweet 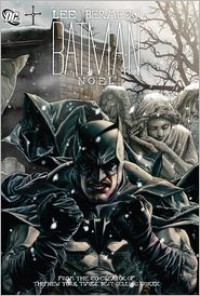